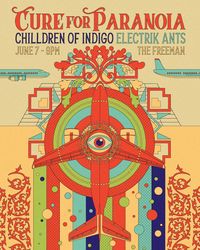 On a bill so big it should be called William, local tour-de-forces Cure for Paranoia, Chilldren of Indigo, and Electrik Ants will be putting on display why this isn’t your parents’ Dallas scene. Redefining metroplex music, all three bands are ferociously unique and dynamically independent while finding common ground in the worlds of aggressive hip-hop and fluid grooves. To say energy will be coursing through The Free Man Friday, June 7, would be an understatement of the drastic variety. Miss this show at your own peril.

Atop the blossoming DFW music scene sits Cure for Paranoia, whose eclectic blend of hip-hop, funk and soul have given them the opportunity to perform with the likes of Nas, George Clinton & Parliament Funkadelic, Flying Lotus and many more. Insightful, insatiable, and ever-expanding, they provide the Cure for whatever ails you.

Aggressive, intelligent, sensory, and ever-passionate, Chilldren of Indigo inject the Dallas music scene with a liveliness any city would be envious to claim. An avant-garde combination of funk, soul, and headbanging hip-hop, Chilldren has carved out a space somewhere between Black Sabbath and Kendrick Lamar. COI provides a transcendent experience not to be missed.

Peer into music’s future with the ever-evolving Electrik Ants. An intoxicating mix of funk, hip-hop, rock, and psychedelia (somewhere between Rage Against the Machine and Gorillaz), the Ants have made their home across the spectrum of musical genres. See them locally before they take over globally.